A manufacturer and bottler for some of the world’s most prestigious beverage brands needed to replace an aging 650kW chiller due to a controller failure that subsequently caused the evaporator to rupture and freeze.

The chiller provided cooling to three pasteurising lines. Lines 1 and 2 can produce up to 24,000 ltr/hr of carbonated product and the third up to 11,000 ltr/hr.

To maintain production, the client was forced to install a rental chiller to provide temporary cooling which was less efficient and not a low-noise version. Thanks to a recommendation from the pasteurising line specifier, ICS Cool Energy were asked to visit the site and carry out a survey and consultation to determine their exact cooling requirements and address any operational needs.

Lines 1 & 2 run for 24 hours a day, 7 days a week, whereas line 3 can operate for as little as 1 day per week, depending on production demands. The total cooling load required for maximum production on all three lines was calculated at 1,120kW.

The most energy-efficient solution included two chillers; one to provide chilled water at 0°C to lines 1 & 2 and a second chiller to provide chilled water at 5°C to line 3. This was supported by a detailed energy analysis audit which demonstrated that an energy saving of 3% per annum and a Co2 reduction of 48,950 tons per annum could be made in comparison to a single chiller serving all three lines.

To reduce the initial capital expenditure, the decision was made to phase the project. Phase one comprised of a single 800kW chiller, with phase two allowing for line 3 to be separated from the main hydraulic circuit and to be fitted with the second chiller unit.

The first of the two chillers specified was the Imperium RTAF 310 SE XLN unit which offers several benefits in comparison to the previous chiller:

• The unique patented evaporator design offers a reduction in refrigerant charge of 48%
• The 3 fixed speed stepless capacity-controlled screw compressors provide improved part load performance
• By utilising R513A refrigerant with a GWP of 631 compared to R134a with a GWP of 1430, the manufacturer’s environmental policy on the use of low environmental impact refrigerants was met
• The extra low noise option including the use of EC fans with axitop meets the required sound power levels at the manufacturer’s boundary without impacting on footprint

The extra cooling capacity offered from the Imperium RTAF 310 SE XLN (chiller 1) will allow lines 1 & 2 to operate at maximum capacity (an increase of 36%) which has never been achieved in the past.

Now only requiring a single pass through the pasteuriser to cool the product and with an increase in thermal output, the new chiller has provided a 40% increase in production.

As well as increasing their cooling capacity by 36% and production by 40%, the efficient Imperium RTAF 310 SE XLN unit will:

• Save them 4% on energy costs when compared to the incumbent unit
• Use 48% less refrigerant and the lower GWP, more environmentally friendly R513a
• Occupy a smaller footprint, which means less installation costs and production down time moving equipment to accommodate
• Meet sound power levels

The Aptus CGAF chiller installed in the second phase will supplement the cooling capacity further and enable production on line 3.

A secondary chiller also means that the manufacturer has a contingency plan if the main chiller was to fail and enables them to plan more thorough maintenance without halting production. 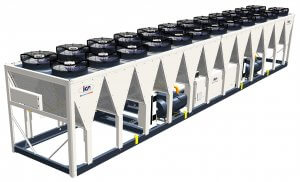 Read how we have made it work for related businesses.

New outlook on free cooling in the window industry

Plastics manufacturing cooling is among the most demanding and challenging of processes, and is renowned for high energy demands.

Critical temperature control for the RNLI

RNLI craft production is especially challenging in the summer months, with high temperatures affecting the composite materials and quality of production.

ICS Cool Energy helped keep a plumbing equipment manufacturer to ‘keep cool’ and resume business as usual as quickly as possible following a fire at its premises in Scotland by providing short term emergency hire equipment while a totally new permanent system was developed.

A specialist producer of high quality injection moulding parts used by global brands including BMW, Nissan, Jaguar and Renault, is on the expansion trail and has slashed its cycle times by 25% thanks to a new temperature control solution from ICS Cool Energy.

New outlook on free cooling in the window industry

Plastics manufacturing cooling is among the most demanding and challenging of processes, and is renowned for high energy demands.

Equipment and ongoing maintenance service was needed by the UK’s largest plastics recycler with the addition of a new wash plant needing not only efficient cooling but also with the lowest possible carbon footprint. And ICS Cool Energy delivered a solution that also provided up to 70% energy savings.

Talk To An Expert

Why not pick up the phone and talk to our friendly and experienced team? We make it easy - whether your need is big, small, long or short term, we're here to help.

for a free no obligation quote

You can find out more about which cookies we are using or switch them off in settings.

Please Get In Touch

This website uses cookies so that we can provide you with the best user experience possible. Cookie information is stored in your browser and performs functions such as recognising you when you return to our website and helping our team to understand which sections of the website you find most interesting and useful.

Strictly Necessary Cookie should be enabled at all times so that we can save your preferences for cookie settings.

If you disable this cookie, we will not be able to save your preferences. This means that every time you visit this website you will need to enable or disable cookies again.